Cottey College was founded in 1884 by Virginia Alice Cottey. A glimpse of the spirit of the founder and the reasons for the founding of Cottey College are expressed in the foreword of the first announcement: 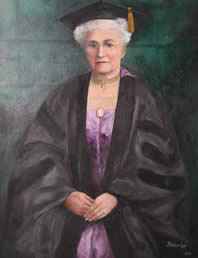 “In presenting to you for the first time the claims of our school, we ask your sympathy and prayers, as well as your hearty co-operation in the work we are about to undertake. Fully realizing, we trust, the great fact that God has called woman to a high and holy destiny in that He has commissioned her to be a co-laborer with himself in the great work of enlightening and saving the world, we desire to open a school that shall have for its prime object the adjustment of woman to this her natural and God-given relation. A school for the education and training of girls demands vastly more than that which is contained in the ordinary curriculum. The moral, religious and domestic elements are all necessary for a symmetrical development.”

Religion, education, and society were strong influences on Virginia Alice Cottey. She was born in a log cabin on a farm nine miles southeast of the village of Edina in Knox County, Missouri, on March 27, 1848. Her parents had followed many members of her mother’s family, the Eads, from Bracken County, Kentucky, to Missouri. At that time, the Southern Methodist Church was organizing congregations in the same area, and meetings were held in the Cottey home for many years. These meetings were a source of inspiration and fellowship for isolated farm families, and a strong influence on Virginia Alice Cottey.

Following the Civil War, Ira and Sara Cottey actively pursued advanced educations for their children. Alice, as her family called her, was an avid reader, and largely self-taught as there simply weren’t a lot of educational opportunities for girls, although because of her parents’ dedication, she had the chance to attend two boarding schools. A love of teaching and learning and the realization of this shortfall in society had a strong influence on her life, and she developed a passion for giving young women the opportunity to learn, as she expressed in the following words:

“When I was a small child I read a book about Mary Lyon, the founder of Mount Holyoke College for Women. It gave me a purpose in life and I devoted all my energy to learning and teaching so that if the time ever came when I could found my own school, I would be ready. I began my teaching career in the district school in Knox County, and continued to study and learn on my own. In 1876, I was offered a teaching position at Central Female College in Lexington, Missouri.” 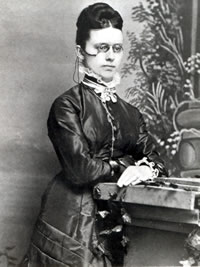 Upon the death of her father in 1883, Virginia Alice Cottey realized that if she planned to start her own school she had better hurry up because at the age of thirty-five, she thought that she would soon be considered an old woman. She spent the summer after Ira Cottey’s death at home, helping her mother and studying a book on the life of Mary Lyon and the process she went through to establish Mount Holyoke. With the encouragement of her sisters, Mary and Dora, and armed with $3,000 in savings, she took the plunge.

In search of a location, she wrote to Southern Methodist ministers across the state of Missouri. Dora was teaching in Dallas, and she wrote to friends in Texas. She received an encouraging letter from Reverend W.T. McClure in Nevada, Missouri. In November 1883, Dora and Alice visited and were very pleased with the city, especially the encouragement of Reverend McClure and Mr. Harry C. Moore, mayor, and owner of the dry goods store.

The leaders of the community realized the opportunity a college would provide for the townspeople. Armed with her savings to finance the building, Virginia Alice Cottey proposed that if the city purchased the grounds for the college and donated them to her in a genuine warranty deed, she would proceed at once to erect a three-story building sufficient to accommodate eighty students. They offered six acres of a cornfield on the western edge of town where she could build a school.

And build a school she did. She began with a little brick schoolhouse, a building that still stands today as the center portion of Main Hall. Originally named Vernon Seminary, its success was evident from the start. Named for the county in which it is located, the townspeople refused to call it that, referring to it as the “Cottey sisters’ school” or Cottey College. From its humble beginnings the College has grown to 14 buildings on an 11-block tract, and a scenic 33-acre wooded area used for campus gatherings and retreats.

In 1890, Virginia Alice Cottey married Samuel Stockard, a widower whose three children were boarding students in the school’s primary department. She accepted his proposal with the qualification: “I know that my school must always come first–it has been so from the beginning.” They were married in Main Hall parlor, with all of the students in attendance.

In 1926, Mrs. Stockard, as she was known after her marriage, received an invitation to join Chapter DW of the P.E.O. Sisterhood. While at the age of 78, she thought she was too old to become a new member, the educational purpose appealed to her and she thought she might contribute some service from her many years of experience. In November that year, the chapter’s education day program revealed the extent of the organization’s philanthropic contributions, all dedicated to women. A thought came to her, almost as a revelation “That is where Cottey College belongs.”

On the convention platform of the 1927 convention of Supreme Chapter in Oklahoma City, Virginia Alice Cottey Stockard presented her life’s work to the Sisterhood. She proposed that P.E.O. accept the deed for the property with no debt against it and agree to raise an Endowment of not less than $200,000, with no time limit for its completion. Her proposal was met with shock and surprise. After extensive discussion and many questions, it was announced the following morning that a majority of the delegates, realizing the opportunity for greater service, had voted to accept her offer.

She recognized the immense courage of the delegates with the following words: “From the bottom of my heart, I thank you. As I have been sitting here, I have been thinking how strange are the ways of God to man. At the time the P.E.O. Sisterhood was beginning to foster the education of women, in a little town in Missouri I was struggling toward that same goal. As I looked at this bowl of Marguerites tied with yellow and white, I thought of a handful of hopeful young girls years ago meeting in a plain study hall to vote on the school colors and a flower to represent them–they decided on the Marguerite and the yellow and white.”

For more than 90 years, the College, its alumnae, and the P.E.O. Sisterhood have worked together to realize Virginia Alice Cottey Stockard’s premise that women should have excellent educational opportunities–the shared flower and its yellow and white colors symbolizing unity and common goals.

This biography of Virginia Alice Cottey was compiled by Nancy Kerbs in the Institutional Research department at Cottey College.