Like in families, traditions at college create powerful bonds through shared memories and experiences. Life at Cottey is rich with traditions – some fun, some whimsical, some poignant. Maybe that’s why our alumnae stay so connected to each other and to us.

The great thing about Cottey traditions is that you can pick and choose the ones that are meaningful to you. You’re not forced to participate, but we’re betting you’ll find at least one that you’ll want to be part of.

The College sponsors a number of events annually that build camaraderie, recognize excellence and service, and celebrate achievement. 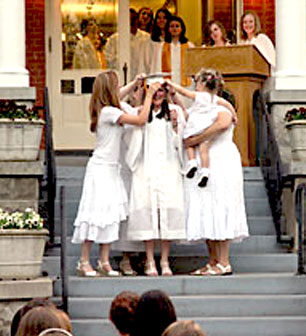 The College sponsors a number of events annually that build camaraderie, recognize excellence and service, and celebrate achievement. Learn more

The daisy holds a special place in Cottey’s history. It was the flower the first young women who attended Virginia Alice Cottey Stockard’s college voted to represent them both in the college’s colors yellow and white and as its official flower. That flower and those colors are still part of Cottey’s tradition today. You’ll encounter the daisy as a recurring theme throughout the Cottey experience. Coincidentally, the marguerite, which is similar to a daisy, is the flower chosen by the founders of the P.E.O. Sisterhood.

Watch Out for Ducks and Owls

Legend has it that years ago when the College was first founded, some senior girls came upon a duck stuck in a frozen pond near the campus. The seniors rescued the duck, and the duck became the official mascot of the Cottey senior (second year) class. Fast forward a few decades to now and you’ll see ducks – mostly the yellow kind you find in your tub – have proliferated on Cottey’s campus. You’ll see them in faculty and staff offices and around all the student living areas. There are two particular traditions inspired by the duck

Olive the Owl is the mascot of the Baccalaureate classes. The owl represents “Older Wiser Learners.” She was named during Founder’s Weekend 2015 by a vote of the alumnae in honor of Olive Gatewood, the first alumna of Cottey.

Each class at Cottey has a number of special traditions. Whether you’re a freshman, sophomore, junior, or senior, you’ll have the chance to get involved and represent your class proudly.

We’ve said it before, food is an important part of Cottey life and part of the way we celebrate too. There are a number of traditions tied to food. Curious?

As you might expect, holiday seasons are a special time at Cottey in particular, Halloween and Christmas are memorable on campus. Boo

We’d Love to Hear From You